This was an awesome show, full of conspiracy and intrigue. James & Ballsrog express their fright of Albino Lullaby, and with the announcement for X-Files Ballsrog tells the tale of the dark side of the moon. We are joined by a very special guest Ernesto who tells of his top two moments in the podcasts history.

WE HAVE A TEASER! ALL SYSTEMS GO!

We have been pretty lax with the content lately, but fear no more, 2015 will be the year of NerdSynq #Yanerdme. I am here to share with you the 2015 promo of the RadioShow, a few clips to wet your whistle to see how we are behind those microphones.  If you haven’t checked the show out you can find it on both iTunes and Podomatic–but here are the links and the video for your viewing pleasure!

And here is the video we have all been waiting for at NERDSYNQ:

ITS A NEW YEAR!

Think of this similar to a game of portal, that lovely logo right there? Yeah it will take you to a world of magic, the archive of our creative ramblings and hilarious conversations. Documented through time, the NerdSynq Podcast is back! Corey, Chris, Ballsrog and Tsuki share the floor in this New Years Episode to talk about resolutions, driving to Kentucky, Kickstarter games, and comics. What’s not to love, YaNerdMe? 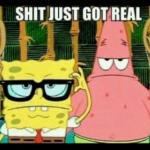 So, I think it’s safe to say that we’ve survived the doomsday apocalypse everyone was hootin’ and hawin’ over at this point.  We can all exhale that huge sigh of relief and mark it off our Bucket Lists.  So…What’s next?  Zombies?  Nah, that turned out to be a huge bummer.  Digital Blackout?  Nope.  Now, we seem to be more connected than is possibly necessary.  I’ve got it—how about some Geekium Overdrive?

It’s total connectivity.  Thank the geeks for that.  Now, you can update Facebook while playing Call of Duty:  Black Ops II while you’re on ‘sick leave’ for a week for ‘unexplained nausea’.  Whee!!  ^^  It’s geekologies becoming mainstream, and Hipster’s tryin’ to walk on your turf!  Well, I must admit that I’m not what most would call a Nerd.  I only think I’m geeky enough.  J

So, what do we do about it?  Granted, I’m slightly behind the 8 ball when I think about how very mainstream being a Nerd is…so if there’s anyone who’s qualified to write this article—it’s moi.  If you’ve read this far, you’re in the same boat I am and probably really want to know how to blend in…

No. 1 – Know Your Memes:  If you don’t know who the pimply dude is with the greasy ponytail, go find him.  And the kid with the argyle sweater.  (You don’t have to emulate these people, just be aware that we could potentially be perceived as such.  Consider it Funny Bully Bait).

No. 2—Bring up the Dress Code:  They are in our element, guys.  We decide what’s in…or maybe we did.  Did we?  I don’t know about everyone else, but this Star Trek shirt that looks like a Band Tour Poster is pretty Effn’ Boss.  Score!

No. 3—Know Your Writers/Directors:  With all this new technology we’ve been waiting so patiently to arrive, now every nerdlet’s fantasies about Tolkien characters and Rowling Landscapes are vividly painted or written, and everyone respects the story for its complexity.  Down with the Twi-whores (excuse the expression, I wonder if it’s not actually appropriate???) who slack off a potentially complex storyline with sappy teenage awkwardness that doesn’t actually apply in any reality save…But I digress…

No. 4—Know when to Nerd Out, and when to…Not:  While being smart and quirky are finally being recognized as endearing traits, there are still going to be haters.  Haters gonna hate, yo.  So, if there’s a chance to reign it in for saved Rep points, err on the side of caution.  No one needs to relive the less glamorous hours of H.S. (at any age).  Things a little bit different now, and being an adult nerd is not to be wasted on geeking out on WoW and…oh hell, what am I saying?!  Be free!!  Be free!!  Be free, young nerdlings!!  Flail your DnD character sheets like the wings of some OwlBear!!  We won!  We won!!*

Disclaimer:  The writer has (*) the following, to remind you that she is totally okay with being guilty by association, while not yet a full bird colonial, or even a private (depending on who you ask) Nerd.  Writer is looking for full sponsorship into the Guild of Nerds, and will gladly perform any initiation!  Thanks for reading!!  —Fion

Error: Twitter did not respond. Please wait a few minutes and refresh this page.