Guardian of the Galaxy Issue 7 Review 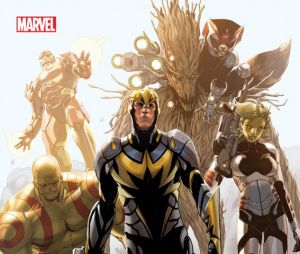 Guardians of the Galaxy Issue 7 Review

One the few benefits of the Marvel Now reboot is that it gave me a chance to broaden my usual comic selection. Mostly due to the fact I’m boycotting Superior Spiderman until Peter Parker comes back and Uncanny X-Force being an utter disaster in my opinion.  I gave Guardians of the Galaxy a shot and I have not regretted it for a second.  The banter between characters is always entertaining.  I can never get tired of the interaction between Stark and Rocket Raccoon and how amazed Iron Man is by the technology he sees.  I have not even mentioned Gamora and Drax who I have not seen in action since the Infinity Crusades when I was a kid. If you’re looking for something new to read this book is definitely worth a look.

In this issue there was a unique twist put on heaven on and earth that I am looking forward to seeing where this goes.   Absolutely cannot forget an Infinity tie in next issue which is probably the best crossover in a while.  An added bonus for anyone that is already a fan there was no “ Blam! Murdered you!” from Rocket Raccoon this issue because Lord knows there has been enough that nonsense.  Overall I’d give this issue a solid 4 out of 5 stars.

Check out a new featurette from Iron Man 3

Marvel Heroes, a free to play game, has released their launch date. The game will go live to everyone June 4, 2013. “But isn’t there a way to get early access?” you ask. Why yes there is. You many decide to pick up on of the many Starter Packs that contain 1 hero with 2 different costumes. You could go for the more expensive Premium Pack that contains 4 heroes with 2 costumes each (personally I got the Deadpool only pack, duh). Or you can get the $200 Ultimate Pack that grants you every character in the game, every costume, permanent 5% bonus xp and item find boost, and a few extra characters and costumes that no one can see.

The Starter Pack gets you a 2 day head start on the competition. Premium Pack gets 4 days. And the Ultimate Pack gets a 7 day jump on the game. Not sure how many people are purchasing the Ultimate Pack, but it might be a little difficult to defeat some of the world bosses with a minimum number of people.

For those that have not heard, Marvel Heroes is a Diablo style game with many game play aspects the same as Diablo. The games story was written by Brian Michael Bendis, who has written for many different Marvel titles such as Ultimate Spider-Man, New Avengers, Averengers vs X-Men and many more.

Today at PAX this trailer was released on the Marvel Heroes villains that are going to be throughout the game.

Those that already have purchased or are going to purchase a Premium Pack or above will have Closed Beta Access from now until the game launches. Don’t forget to check out Marvel Heroes when it launches June 4, 2013!

Come and check out out Fighting Game Throwdown of Marvel Vs. Capcom 3!!