The newest installment of arguably EA’s most stable franchise is here, and it does not disappoint.  Not much, as far as I can tell was taken out of NHL, and honestly, not much really needed to be.  Instead, EA Canada decided to streamline the menus and beef up the content, much to my liking.  The on-ice product is noticeably better, due to the addition of the Player Impact Engine from FIFA and the Enforcer Engine from Fight Night.  Even if EA Canada stopped there, the improvement would have been enough to warrant a new game.  But instead of being satisfied with a more realistic product, they upped the ante with the Be A Pro mode, retooled and renamed as Live the Life mode.  It adds a much-needed personality and depth to the experience of playing in the NHL.

The inclusion of the Player Impact Engine, based on the physics engine used in the FIFA series is a subtle but meaningful addition.  Checking is now handled automatically and manually, with the left and right stick, respectively.  Simple skating into another player is enough to produce a check, but this will often result in simple nudges and jostling for position, unless skating at high speeds.  stronger hits can be doled out with the right stick, but beware of incurring charging or cross-checking penalties.  Careful to keep the game balanced, EA Canada added one-touch dekes to the offensive repertoire, allowing for a quick change of direction to avoid those big hits.

With a renewed emphasis on player interaction, an overhaul of the fighting system was also needed. Fights can still be instigated pre and post whistle with the Y button, but big hits can also cause play to be halted while retaliatory ensues. A simple control scheme with surprising depth makes fights in NHL 14 frantic but strategic, requiring more than button mashing to win. Cosmetic and lasting Injuries can result, from black eyes to broken noses, and not just for the loser. Winning a fight will replenish your teams energy, rile up the crowd (if you are at home), and give you momentum to either get back into the game or finish of your opponent for good. Fighting is now more fun than ever before, and more important to boot.

A knockout is a great way to fire the crowd up

Those who primarily play offline (myself included) will love the revamped and renamed Be a Pro mode, now titled Live the Life.  While the core of Live the Life is the same, a few new wrinkles add some much-needed personality and diversity to the game of hockey.  After most games you will have an interview, with questions ranging from your own play to the play of your teammates and opponents.  Simple multiple choice answers are mapped to the face buttons, with responses ranging from humble to dismissive, and sometimes even combative.  Also, your player will engage in random off-ice events, ranging from a night out with teammates to your in-laws spending the night.  Your response to the events will affect your Likability meters.  There are four separate meters that measure your Likability, from Fans and Teammates, to Management and Family.  There is more to this than meets the eye, as a high rating for Management will increase your chances of being named a team captain, and will reduce the likelihood of you being sent to the minors or being put on a lower line.  Beware of low ratings, as a low Teammate rating will cause your teammates to stop passing you the puck, even when you call for it.

+ New additions are solid and useful

+ No loss of previous quality

– Another year, another game, albeit with improvements

Fall is here. It means many things to many people, but to me, it really only means three things. School starts again, the blockbuster video games are just around the corner, and football. AMERICAN football. Don’t get me wrong, I love soccer, but that’s what it is, soccer. With the return of football comes the newest iteration, and at least for the time being the LAST iteration (but more on that later), of NCAA Football 2014.

Let me start by saying I absolutely LOVE the addition of the Infinity Physics engine to NCAA Football. It adds a degree of realism to the running game that was severely lacking in previous years. Joining the new physics is the Ultimate Team mode and a revamped scouting system. These two don’t make nearly as big of a splash, and are certainly not without major flaws. 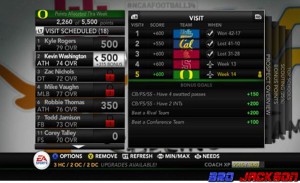 Scouting in NCAA Football 2014 is entirely new from the previous installment. Out are the call option and sway interest conversations, and in is a pool system, where you allot each prospect on your board points, from zero (0) to five hundred (500). This streamlines the scouting system and gets you back to the action quicker, which is exactly what EA was trying to do. It grants a wider perspective of the recruiting system, one that represents the current college recruiting atmosphere well. Unfortunately, this wider view also takes away from the intimacy and individuality of the recruiting process. In 2013, you knew each of your targeted prospect’s likes and dislikes, and you could attempt to persuade individual recruits to look more favorably at your school. This created a sense of familiarity with the recruits, and a sense of accomplishment when you finally landed the recruit you worked so long and hard to get. It’s not impossible to feel connected to your recruits in 2014, but its all up to you, and the game mechanics will not do you any favors. All things considered, it’s a lateral shift in the recruiting system from last year to this year. 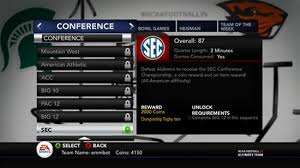 Ultimate Team mode in NCAA Football is a great idea, and a long time coming. Since current college players likenesses’ can’t be used, the team at EA decided to use former college players, including different years of past greats. But what fun is assembling a team of college greats if you can’t show them off? Not much fun I tell you, so in addition to playing against the CPU, you can play games against other Ultimate teams online, and the more you win, the more coins you earn, which allow you to get better players. One issue in that respect is the lack of game modes that you can play, which is compounded by the high overall rankings of the majority of CPU teams available to compete against. I confess that I haven’t played many games against other human players, but I’m finding it hard to earn coins by playing against just the cpu. This would be an easy fix for 2015, but therein lies another issue.

The Death of NCAA Football

The NCAA and EA are both currently involved in lawsuits by former college athletes who feel their likenesses were used without their permission. These players feel that the money both the NCAA and EA have made while exploiting their marketability whilst simultaneously conspiring to pay these athlete nothing is criminal. These lawsuits are more aimed at the NCAA, but EA is by no means free from guilt here. When the deal between EA and the NCAA expired this June, the NCAA decided smartly, but it’s not like they had any other choice, to not renew their partnership with EA in creating college sports games. Before you worry too much, EA has said they will still be making a college football game for 2014-2015, albiet without the NCAA, meaning it will be lacking the trademarks of the colleges represented by the NCAA (i.e. is all of them). This will be a new era in college sports video games, one I am not eager to see.

Back in the present, NCAA Football 2014 is a great game, with sound and fluid mechanics, and enough bells and whistles to shake a stick at. If this is the last NCAA sports game for a while, or ever, it certainly made a statement.

+ A strong last stand by the NCAA Football series

= Dynasty mode is changed, but not improved

Error: Twitter did not respond. Please wait a few minutes and refresh this page.